Andromeda is not our Closest Galaxy Neighbour 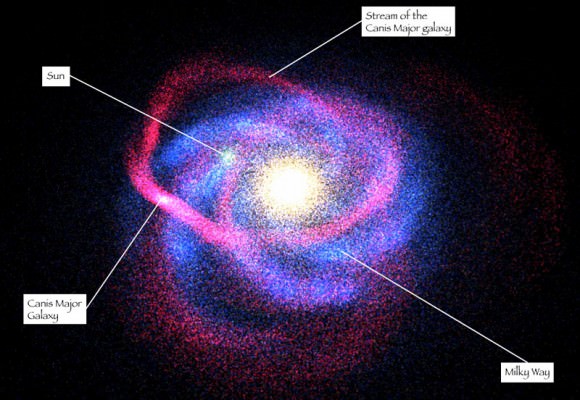 The Canis Major Dwarf Galaxy is thought to contain one billion stars. That’s a relatively high-percentage of which are in the Red Giant Branch phase of their lifetimes. It has a roughly elliptical shape.

The current theory is that the Milky Way swallowed this galaxy.

Some other globular clusters orbit the center of our Milky Way, like NGC 1851, NGC 1904, NGC 2298 and NGC 2808. Astronomers think they have been a part of the Canis Major Dwarf Galaxy before its accretion. It also has associated open clusters. Astronomers think that these clusters have formed as a result of the dwarf galaxy’s gravity perturbing material in the galactic disk and stimulating star formation. 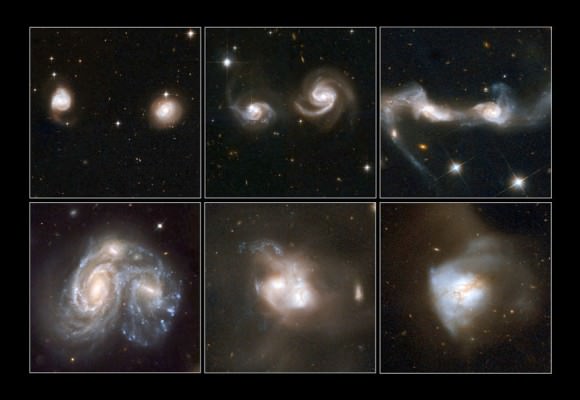 But in 2003 all of that changed when the Two Micron All-Sky Survey (2MASS) discovered the Canis Major Dwarf Galaxy. They made the discovery after they relied on data obtained by the Mt. Hopkins Observatory in Arizona (for the Northern Hemisphere) and the Cerro Tololo Inter-American Observatory in Chile (for the southern hemisphere).

From this data, astronomers conducted a survey of 70% of the sky. Thus, detecting about 5,700 celestial sources of infrared radiation. Infrared astronomy takes advantage of advances in astronomy that see more of the Universe since infrared light is not blocked by gas and dust to the same extent as visible light.

Because of this technique, the astronomers were able to detect a very significant over-density of class M giant stars in a part of the sky occupied by the Canis Major constellation, along with several other related structures composed of this type of star, two of which form broad, faint arcs (as seen in the image close to the top). The prevalence of M-class stars is what made the formation easy to detect. These cool, “Red Dwarfs” are not very luminous compared to other classes of stars, and cannot even be seen with the naked eye. However, they shine very brightly in the infrared and appeared in great numbers.

Astronomers also believe that the Canis Major Dwarf Galaxy is in the process of being pulled apart by the gravitational field of the more massive Milky Way Galaxy. The main body of the galaxy is already extremely degraded, a process which will continue as it travels around and through our Galaxy.

In time, the accretion process will likely culminate with the Canis Major Dwarf Galaxy merging entirely with the Milky Way, thus depositing its 1 billion stars to the 200 t0 400 billion that are already part of our galaxy.

What Are Quantum Black Holes?

Some Things Hubble Taught Us About The Universe