Have You Asked Yourself Exactly What Is Gravity?

We know that something attracts us down to the Earth’s core and we call that gravity. But exactly what is gravity and what does it do?

We do not know what exactly gravity is. We can define what it is as a field of influence, and with general relativity, we can define a language which states that it is a property of our real world that is mathematically equivalent to not just the geometry of space-time, but equivalent to space-time itself.

Some think that it is made up of particles called gravitons, which flit about at the speed of light. We do not know what gravity is, we only know how it operates in various corners of our universe. Space and time wouldn’t exist without gravity.

What do we know about gravity?

We know that Gravity is the force by which a planet or other body draws objects toward its center. The force of gravity keeps all of the planets in orbit around the sun.

Gravity is a force pulling together all matter. The more matter, the more gravity, so the more massive something is, the more of a gravitational pull it exerts.

Gravity is what holds the planets in orbit around the sun and what keeps the moon in orbit around Earth. The gravitational pull of the moon pulls the seas towards it, causing the ocean tides. Gravity creates stars and planets by pulling together the material from which they are made.

What else does gravity do?

Now that we know that objects with more mass have more gravity, gravity also gets weaker with distance. So, the closer objects are to each other, the stronger their gravitational pull is.

Earth’s gravity comes from all its mass. All its mass makes a combined gravitational pull on all the mass in your body. That’s what gives you weight. And if you were on a planet with less mass than Earth, you would weigh less than you do here. 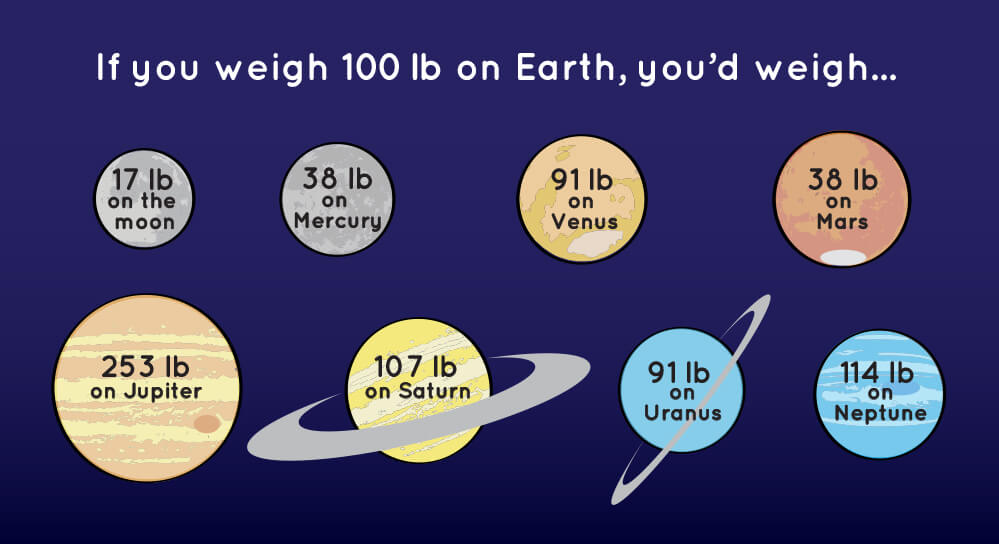 Basically, as we walk on the surface of the Earth, it pulls on us, and we pull back. But since the Earth is so much more massive than we are, the pull from us is not strong enough to move the Earth, while the pull from the Earth can make us fall flat on our faces.

Albert Einstein discovered that gravity not only pulls on mass but also on the light. If you shine a flashlight upwards, the light will grow unnoticeably redder as gravity pulls it. This is not something you will see with your eyes, but scientists have instruments that can measure it.

What in the universe has the strongest gravitational force?

It’s black holes. They pack so much mass into such a small volume that their gravity is strong enough to keep anything, even light, from escaping.