As days go by it gets even harder to deny global warming as another Iceberg Breaks Off From Antarctic.

This massive iceberg weighs more than one trillion tons and has broken free from western Antarctica.

Between July 10 and July 12, a massive iceberg measuring approximately 2,240 square miles (5,800 square kilometers) — one of the biggest ever recorded — separated from Antarctica’s western peninsula, the European Space Agency (ESA) reported. 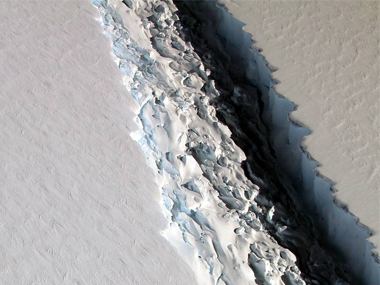 The calving of the 5,800 square kilometer iceberg leaves the Larsen C Ice Shelf reduced by more than 12 percent. The landscape of the Antarctic Peninsula changed forever.

This event is not a surprise at all. Scientists have been expecting this event for several years after monitoring a crack in Larsen C since 2010.

Larsen C lies on the eastern coast of the peninsula and is the fourth largest ice shelf on the continent. This one event has reduced the surface area of the Larsen C ice shelf by more than 12 percent. Changes will need to be made on the map of Antarctica.

This is the third ice shelf on the western peninsula of Antarctica to undergo massive ice loss in just over two decades. The Larsen A ice shelf broke apart in 1995, and between Jan. 31 and March 7, 2002, Antarctica lost 1,250 square miles (3,250 square km) of ice when the Larsen B shelf collapsed, according to NASA.

Data from the European Space Agency Sentinel-1 satellites monitored the development of the rift over the last year.

Sentinel-1 is a radar imaging system capable of acquiring images regardless of cloud cover.