RemoveDebris is a spacecraft that will test varying methods to remove space garbage. Now, it is ready for a launch.

RemoveDebris is an EU (European Union) space-junk-wrangling spacecraft. It will use a harpoon and net to demonstrate active removal of orbital debris.

A consortium of 10 European companies has developed the 100-kilogram spacecraft.

The spacecraft will lead its way to the International Space Station on a resupply rocket. It will be the largest and heaviest satellite to deploy from the ISS.

“Nothing of this size has ever been launched from the ISS before,” said Jason Forshaw, RemoveDebris project manager at the University of Surrey’s Surrey Space Centre, which leads the consortium.

“Most of the things they are launching from there are CubeSats, much smaller objects, 10 [kilograms] or so,” Forshaw said. “As you can imagine, we are progressing through the safety reviews and we are just going through those at the moment.”

The space debris problem worries scientists because it is putting spacecraft and astronauts in danger.

An estimation concludes that there are about half a million pieces of man-made rubbish orbiting the Earth. The dangerous debris ranges from huge defunct satellites to spent rocket boosters and nuts and bolts.

Possible collisions can be very dangerous and they will cause even more pieces of debris.

The European Union funded a sum of 15.2 million euros to develop the spacecraft. Employees have assembled the probe in Surrey and will blast off early next year. The Surrey Space Centre at the University of Surrey leads the mission. 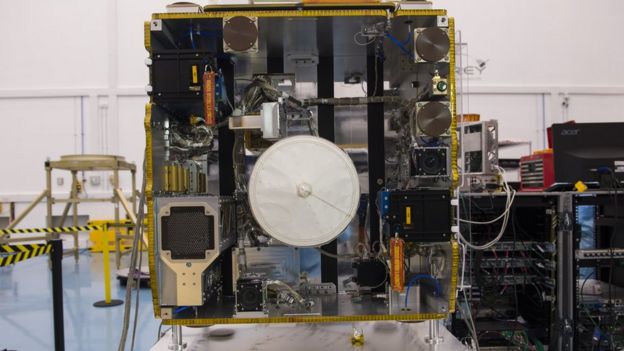 Scientists have assembled the spacecraft in the UK. Credit: Max Alexander

The assembly of the spacecraft has taken place at Surrey Satellite Technology Ltd (SSTL) and is almost complete.

Dr. Forshaw said: “RemoveDebris will be one of the world’s first missions in this area…. We have technologies on here that have never been demonstrated in space before.”

The spacecraft will lead its way to the International Space Station on a resupply rocket. Then, before the launch, astronauts will unpack it and begin the experiments.

The RemoveDebris will use a harpoon and net to demonstrate active removal of orbital debris. The main spacecraft will deploy two smaller CubeSats while a net will capture one of them. However, employees will not tether the net to the main craft as it would be in a real-life scenario, due to safety concerns.

“The CubeSat could bounce back and hit your main satellite, so for this mission, because it’s a demonstration, we got rid of the tether,” explained Forshaw.

The orbiter will also test future de-orbiting technology. As it descends to Earth it will deploy a 10sq m sail, which will change the spacecraft’s speed and ensure it burns up as it enters the atmosphere.

“It will prevent the spacecraft from becoming space junk itself,” Dr. Forshaw explained.

Evidence Of Ancient Megaflood On Mars