Researchers want to know if a sustainable alien civilization exists somewhere, maybe outside our galaxy or “our universe”.

Climate change, deforestation, and biodiversity loss is something that is happening right in front of our eyes. Many out there believe that creating a sustainable version of civilization is one of humanity’s most urgent tasks.

But, how do we know if sustainability is even possible? Are planets with sustainable civilizations also something the universe contains? Or does every civilization that may have arisen in the cosmos last only a few centuries before it falls to the climate change it triggers?

Adam Frank, an astrophysicist from the University of Rochester is leading a team of researchers to find out. They created mathematical models to evaluate how a technologically-advanced alien society (exo-society) would develop alongside an evolving planet.

Scientists created their models based in part on case studies of extinct civilizations, such as the inhabitants of Easter Island. Famous for its huge human statues, the island’s population faced near-extinction by the 18th century.

“What we know about Easter Island was that people arrived there maybe in 400 AD [and] built a vibrant civilization,” Frank said. “We think they overshot the carrying capacity of their island. They used up all their resources and their numbers came down pretty quickly…basically, the civilization collapsed.”

“If we’re not the universe’s first civilization,” Frank says, “that means there are likely to be rules for how the fate of a young civilization like our own progresses.”

Human Project of a Sustainable Civilization

Researchers know how to better predict what the human project needs for the civilization to survive. That is by thinking of civilizations and planets—even alien ones—as a whole.

“The point is to recognize that driving climate change may be something generic,” Frank says. “The laws of physics demand that any young population, building an energy-intensive civilization like ours, is going to have feedback on its planet. Seeing climate change in this cosmic context may give us better insight into what’s happening to us now and how to deal with it.”

“Imagine if 7 out of 10 people you knew died quickly,” Frank said in a statement. “It’s not clear a complex technological civilization could survive that kind of change.”

In a sustainability scenario, the rising population and temperatures reach a steady balance. Societies compensate for growing environmental pressures by switching to low-impact resources like wind and solar power. But, if a civilization did not slow their use of resources, they might face a collapse-without-resource-change situation. A situation where the population will grow quickly, peak and then plummet. In this scenario, civilization might completely disappear. 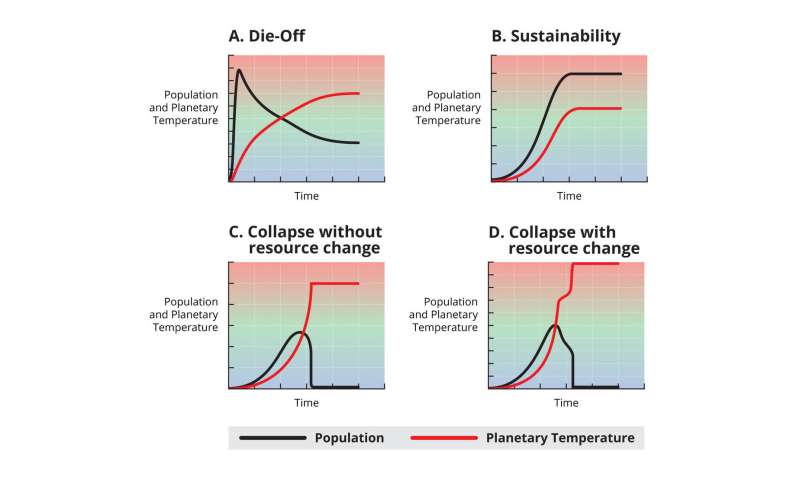 Four scenarios for the fate of civilizations and their planets, based on mathematical models developed by Adam Frank and his collaborators. The black line shows the trajectory of the civilization’s population and the red line shows the co-evolving trajectory of the planet’s state (a proxy for temperature). Credit: University of Rochester illustration / Michael Osadciw.

Right now researchers can’t definitively predict the fate of the earth. The next steps will be to use more detailed models of the ways planets might behave when a civilization consumes the energy of any form to grow. In the meantime, Frank issues a sober warning.

“If you change the earth’s climate enough, you might not be able to change it back,” he says. “Even if you backed off and started to use solar or other less impactful resources, it could be too late, because the planet has already been changing. These models show we can’t just think about a population evolving on its own. We have to think about our planets and civilizations co-evolving.”

Thumbnail image: A case study of the inhabitants of Easter Island served in part as the basis for a mathematical model showing the ways a technologically advanced population and its planet might develop or collapse together. Rochester astrophysicist Adam Frank and his collaborators created their model to illustrate how civilization-planet systems co-evolve. Credit: University of Rochester illustration / Michael Osadciw