Here’s Why Saturn’s Moons have a Weird Shape

A new study details the history of Saturn’s moons. The small inner moons of Saturn look like giant ravioli or baguette.

NASA’s Cassini spacecraft has studied the ringed planet up close for 13 years. It has also revealed their spectacular eerie shapes. The legendary spacecraft took images that got planetary scientists wondering how these satellites ended up with such strange shapes.

Merging collisions between tiny moons might have caused the weird shape of Saturn’s small inner moons, according to a new study published in the journal Nature.

Researchers of the University of Bern show how these moons were formed. Also, computer simulations demonstrate how the merging collisions shaped these little moons.

Adrien Leleu, a planetary scientist at the University of Bern in Switzerland, and colleagues developed computer simulations that show how the shapes of Saturn’s inner moons might have evolved over time. So, the final results show that the powerful effects of Saturn’s gravitational pull were a key influence.

“The spectrum of shapes among Saturn’s small moons is a natural outcome of merging collisions among similar-sized moonlets possessing physical properties and orbits that are consistent with those of the current moons,” authors wrote in the journal Nature. A significant fraction of such merging collisions take place either at the first encounter or after 1–2 hit-and-run events, with impact velocities in the range of 1–5 times the mutual escape velocity,” authors further explain.

Therefore, Saturn’s inner moons couldn’t have formed with these shapes by the gradual accretion of material around a single core. Instead, the researchers found that Saturn’s inner moons likely formed through a series of collisions between tiny moonlets. This is known as the pyramidal regime formation scenario. 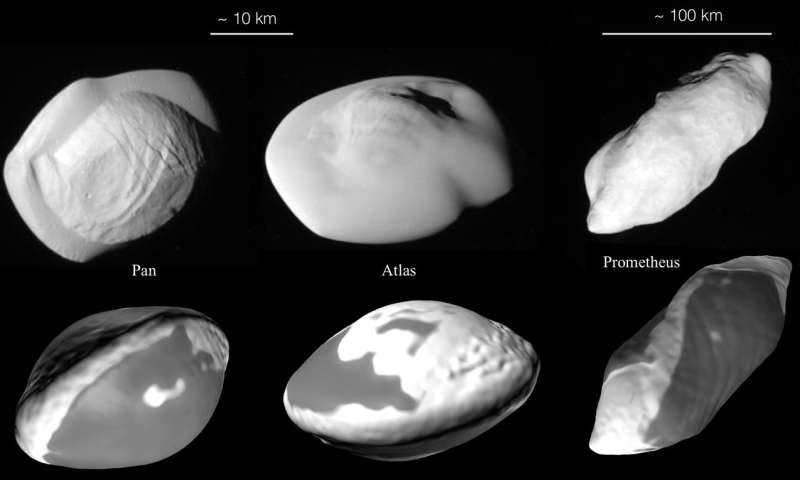 The top row shows 3 small moons of Saturn imaged by the Cassini spacecraft. Shown at the bottom are the model outcomes. Credit: NASA/JPL-Caltech/Space Science Institute/University of Bern

The computer simulations also revealed the special environment in which Saturn’s inner moons exist that makes near-head-on collisions frequent. “We found that 20 to 50 percent of the small moons should display either an equatorial ridge or an elongated shape, while the rest should have more random potato-like shapes,” Leleu said. “And this is the case. Considering the six inner moons Pan, Atlas, Prometheus, Pandora, Janus and Epimetheus, the first three display these features, while the others — Pandora, Janus and Epimetheus — have random shapes.”

Thumbnail image: Formation of Atlas, one of the small inner moons of Saturn. Credit: A. Verdier