Swimming in the Lakes of Saturn’s Moon Titan

There are hundreds of moons in our solar system. Saturn’s moon Titan is the only one with a dense atmosphere and large bodies of liquid on its surface.

Titan is 50% larger than the Earth’s Moon, and 80% more massive. Liquid on the biggest moon of Saturn is different from the Earth’s waters.

Liquid hydrocarbons fill the exotic seas and lakes on Titan. Astronomers call the large bodies of liquid water, maria (seas) and the small ones, lacus (lakes). They cover almost 2% of Titan’s surface.

You can find three large seas on the moon. All of these seas lie close to the moon’s north pole, surrounded by numerous of smaller lakes in the northern hemisphere. Meanwhile, researchers have found only one large lake in the southern hemisphere.

The Cassini–Huygens space probe have detected these liquid ethane and methane waters.

There are vast seas several hundred miles (or kilometers) across and up to several hundred feet (or meters) deep. You can also find smaller, shallower lakes, with rounded edges and steep walls that are generally found in flat areas.

The largest known body of liquid on the surface of Saturn’s moon is Kraken Mare. It turns out, this lake is larger than the Caspian Sea on Earth. 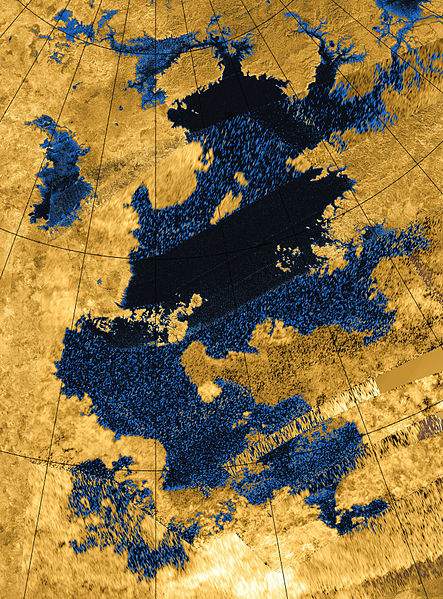 So, Titan is more like a terrestrial planet. Similar to Earth, Saturn’s moon has nitrogen-dominated atmospheres with a percentage of 95%. But, unlike Earth, it has very little oxygen.

In the atmosphere of Titan, you can find a reaction between nitrogen and methane, therefore, producing a wide variety of organic materials. Researchers say that the heaviest materials fall to the surface.

Alice Le Gall is a Cassini radar team associate at the French research laboratory LATMOS, Paris. Together with his colleagues, they think that when these compounds reach the sea, some, dissolve in the liquid methane. They arrive at the seas either by directly falling from the air, in the form of rain or through Titan’s rivers. The mysterious compounds, such as nitriles and benzene, sink to the seafloor.

A study found that the shoreline around Ligeia Mare, the second largest sea on Titan, may be porous and flooded with liquid hydrocarbons. And just like the seaside on Earth, scientists thought that the surrounding solid terrains would warm more rapidly than the sea.

However, Cassini did some measurements and refuted the claims. The spacecraft’s data did not show any significant difference between the sea’s temperature and that of the shore over this period. So, the terrains surrounding the lakes and seas are wet with liquid hydrocarbons. This would make them warm up and cool down much like the sea itself.

If you were to jump in any of the Titan’s seas, since there is very little gravity, you would fall very slowly.

However, after splashing into the sea you would sink to the bottom very fast. In the underwater, everything would appear dark and you would feel very uncomfortable. It would be exhausting to swim there as you would need to hardly push the methane to reach the surface.

An interesting fact is that even though there is wind on Titan, you won’t find water waves there. That’s because the low gravity of the moon offers so little resistance to wave motion.