Light is pretty strange. It can look like a particle and a wave, depending on how you look at it. No pun intended.

Since the very first theories we had about light, thousands of years ago, our view has changed dramatically.

First, ancient humans thought our eyes shoot beams that hit objects and that this was responsible for the sense of sight. Then we thought, hmmm… maybe objects emit light. But that wasn’t the case either.

Later on, while studying light rays, we figured that instead of light being emitted by objects, its rays came from the Sun and bounced from objects to our eyes. And we were right.

In the seventeenth century, Isaac Newton decided that light was made up of particles, while his rival, Robert Hooke, thought of it as a wave. Both of them based their theories on observations of light’s behaviors: reflection and refraction.

During that time, people were familiar with the reflection of light from a mirror for example, but not many quite understood what refraction meant. Refraction is when light travels through a medium, like water, leading to the bending of light.

However, Newton and Hooke were both right. Kinda. Well, I told you, it’s weird.

In the 19th century, British polymath Thomas Young designed a genius idea, known as the double-slit experiment, to see whether light behaved as a particle or a wave.

So it’s a wave, right!? Not exactly. And here comes the mind-blowing part of this experiment.

When particles such as photons or electrons go through the two slits, they create the same interference pattern on the back wall as waves do. But when they are observed, they cast a two-slit pattern resembling particles. Isn’t that crazy?

The electrons appear to act like waves when you’re not observing them, but as particles when you are. It’s like the electron knows that we are watching it. How? No one knows. And if you find out, please reach out to us here: contact@cosmoknowledge.com.

This shows that at a quantum level, light and matter can exhibit both particle-like and wave-like properties.

Light is made of quanta called photons. These quantum objects follow the rules of quantum mechanics, so they can behave as particles and waves.

In the quantum field theory, objects are not particles but fields. Particles are unit excitations of these fields. The lowest energy state of a field is when it thas no excitations at all. This can’t happen in the universe we know.

Photons are excitations of the electromagnetic field. For a photon to exist, it takes a tremendous amount of energy. If there’s no excitation in the field, there’s no photon. Photons constantly vibrate and have momentum.

We are slowly starting to understand that particles don’t even exist. There are no particles, only fields.

And that’s when string theory comes in.

String theory completely changes the standard description of the universe by replacing all matter and force particles with tiny vibrating strings that twist and turn in complicated ways. These strings are what appear to us as particles.

Very tiny objects do not obey the same rules as everyday objects.

One misconception about light is that it is made of photons. It doesn’t necessarily mean that a collection of photons makes up light. Just one photon can make light.

Light is made of electromagnetic waves in a quantum field, and this is described by the quantum electrodynamics, a quantum field theory, which describes how light and matter interact.

An electromagnetic wave may contain a group of photons or even just one. A single energy-step.

As you see, light and quantum particles act in very strange ways, and I am looking forward to more experiments in the future. But one thing is for sure, quantum mechanics is poised to take over technologies of the 21st century.

There Could Be Up To Four ‘Hostile’ Civilizations In Our Galaxy 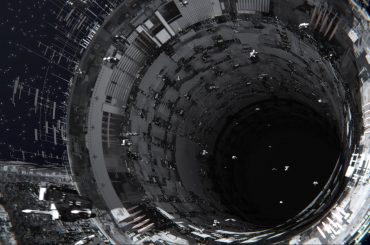