Astronomers with the Pan-STARRS1 telescope in Hawaii, first saw this object on Oct. 19. They currently discovered that the asteroid’s shape is similar to a cigar.

The weird object is about a quarter-mile long. It comes from outside our solar system traveling at very high speeds.

“This thing is an oddball,” said Karen Meech of the University of Hawaii’s Institute for Astronomy, who led an international team that studied the interstellar interloper.

However, astronomers call it ‘Oumuamua with an official scientific designation 1I/2017 U1.

The weirdo first passed around the sun on Sept. 9 and made its closest pass by Earth on Oct. 14.

At first, astronomers thought it could be an ancient comet. However, later observations revealed it was an asteroid from another solar system.

“For decades we’ve theorized that such interstellar objects are out there, and now — for the first time — we have direct evidence they exist,” NASA’s Thomas Zurbuchen, said in a statement.

Rock and possibly metals make this dense asteroid. The object has no water or ice and it has a reddish color. The effects of irradiation from cosmic rays over hundreds of millions of years reddened the object.

In composition, this object is similar to asteroids inside our solar system. However, it is very different when it comes to its shape, a very long object in the shape of a cigar.

“This history-making discovery is opening a new window to study the formation of solar systems beyond our own,” Zurbuchen said.

Nevertheless, astronomers say there’s a chance that the object might be a free-floating asteroid, wandering through our Milky Way galaxy. Thus, not attached to any star system.

Below you can see an artist’s rendering of the weird object.

The name “Oumuamua in Hawaiian reflects the way this object is like a scout or messenger sent from the distant past to reach out to us,” the authors wrote in the study. They published it on Monday in the peer-reviewed British journal Nature.

However, it was very hard for astronomers to get some good looks of the interstellar “space cigar.” But, indeed astronomers have never seen a similar object before. 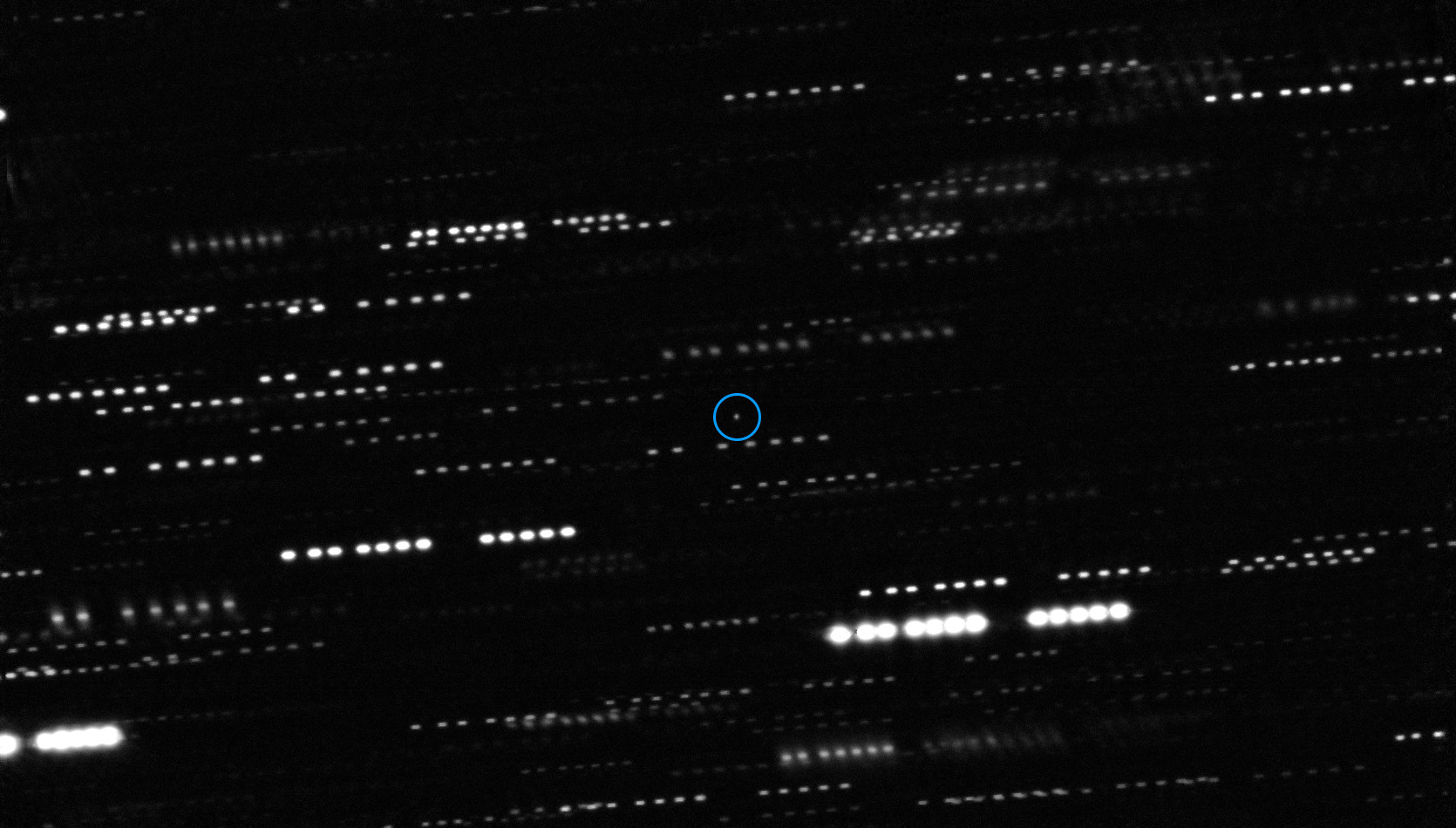 The blue circle marks the object and appears to be a point source, with no surrounding dust. Trails of faint stars smeared as the telescopes tracked the moving asteroid, surround the object. Credit: ESO/K. MEECH ET AL.

Ralf Kotulla, of the University of Wisconsin-Madison, together with its team and colleagues from UCLA and the National Optical Astronomy Observatory (NOAO) captured some of the first images of U1 using the 11.5-foot (3.5 meters) WIYN Telescope on Kitt Peak in Arizona.

Looking at the images, astronomers concluded that the object doesn’t have a coma – the cloud of dust and gas that fizzes from a comet as it approaches the sun – and is, therefore, an asteroid with an irregular shape.

However, it is heading for the constellation Pegasus, the asteroid will pass out of range of our telescopes in mid-December.